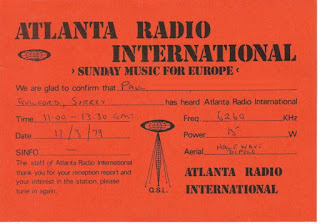 Tune around on a Sunday morning 40 years ago and you'll be struck by how many free radio stations
from the UK were around.

Unlike today, the 1980s saw many stations take to the airwaves on 48 and 41 metres. Some broadcast once a months, others more regularly. Many were slicky produced fast-moving shows which had an army of fans, often recorded in advance on to a cassette tape then broadcast from a remote location, to evade the GPO.

Here are some of the British stations I heard in the early 80s. Some of these audio clips have already featured in my Pirate Memories blog. The number in brackets is the time each station appears on the recording. The link at the end of the index will take you to the Mixcloud page where this recording is hosted.