Remembering the shortwave pirates of the 1990s 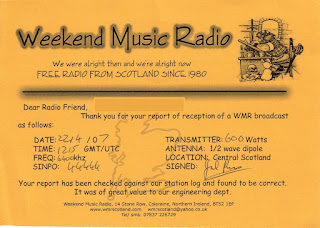 Over a period of a couple of months, a blogger called The 1990's Free Radio Listener has been looking back at the British shortwave pirates who entertained us during the 1990s.

His wrote about his memories of tuning in to stations like Live Wire Radio, Subterranean Sounds, Weekend Music Radio and many others.

There was also a look at how it compares to the shortwave free radio scene today with stations like Radio Merlin International and Radio Pamela still keeping the flag flying.

His post about WMR even brought a comment from the station operator Jack Russell who wrote: "Hey man, thats a very nice article to write about WMR. Don't discount anything for this year. Last year was an embarassment as far as broadcasting went. Not a single transmission for the 40th anniversary year. No sign of BRI either who also started in 1980, but at least FRSH made it happen with their own excellent broadcasts....It has all been a bit lacking in time over the last few years, with one thing or another, but still here, still listening, still missing being on the air on SW."

The 1990s Free Radio Listener is also keen to hear the memories from other listeners from that era who remember tuning in to these  and other stations.